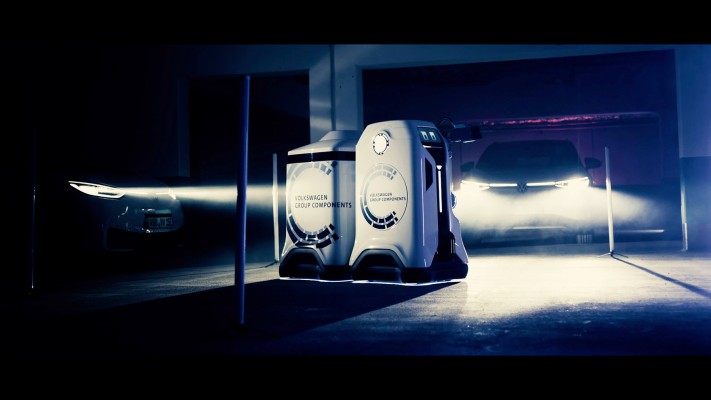 Volkswagen Group has developed a mobile electric vehicle charger that can autonomously navigate parking areas, power up an EV and then make its way back to its outpost without the intervention of humans.

The prototype, which VW Group Components created, aims to showcase how the automaker will expand charging infrastructure over the next few years to meet the expected demand that will arise as it produces and sells more electric vehicles. VW Group has committed to launching dozens of electric models over the next decade. The group’s Volkswagen brand plans to build and sell 1.5 million electric cars by 2025.

“Setting up an efficient charging infrastructure for the future is a central task that challenges the entire sector,” Volkswagen Group Components CEO Thomas Schmall said in a statement. “We are developing solutions to help avoid costly stand-alone measures. The mobile charging robot and our flexible quick-charging station are just two of these solutions.”

VW Group is developing a portfolio of different DC charging products, including a DC wallbox that charges up to 22 kilowatts. The automaker began piloting its DC wallbox earlier this month at some of its production sites in Germany. VW Group is also planning to launch a flexible — yet still more stationary — quick-charging station will be launched onto the market in early 2021.

The mobile charging robot doesn’t have a release date. The company said now that it has reached prototype status it will be “comprehensively further developed.” There is one caveat for the mobile charger. VW said that car-to-X communication, which allows a vehicle to “talk” to infrastructure, will be one prerequisite for the mobile charger to reach market maturity.

Schmall said the DC charging products will not just focus on customers’ needs and the technical prerequisites of electric vehicles, but will also consider the economical possibilities of possible partners such as operators of parking bays and underground car parks.

You can watch the video of the mobile charging robot in action below.

Tappity raises $1.3M for its interactive and educational video library for kids – TechCrunch